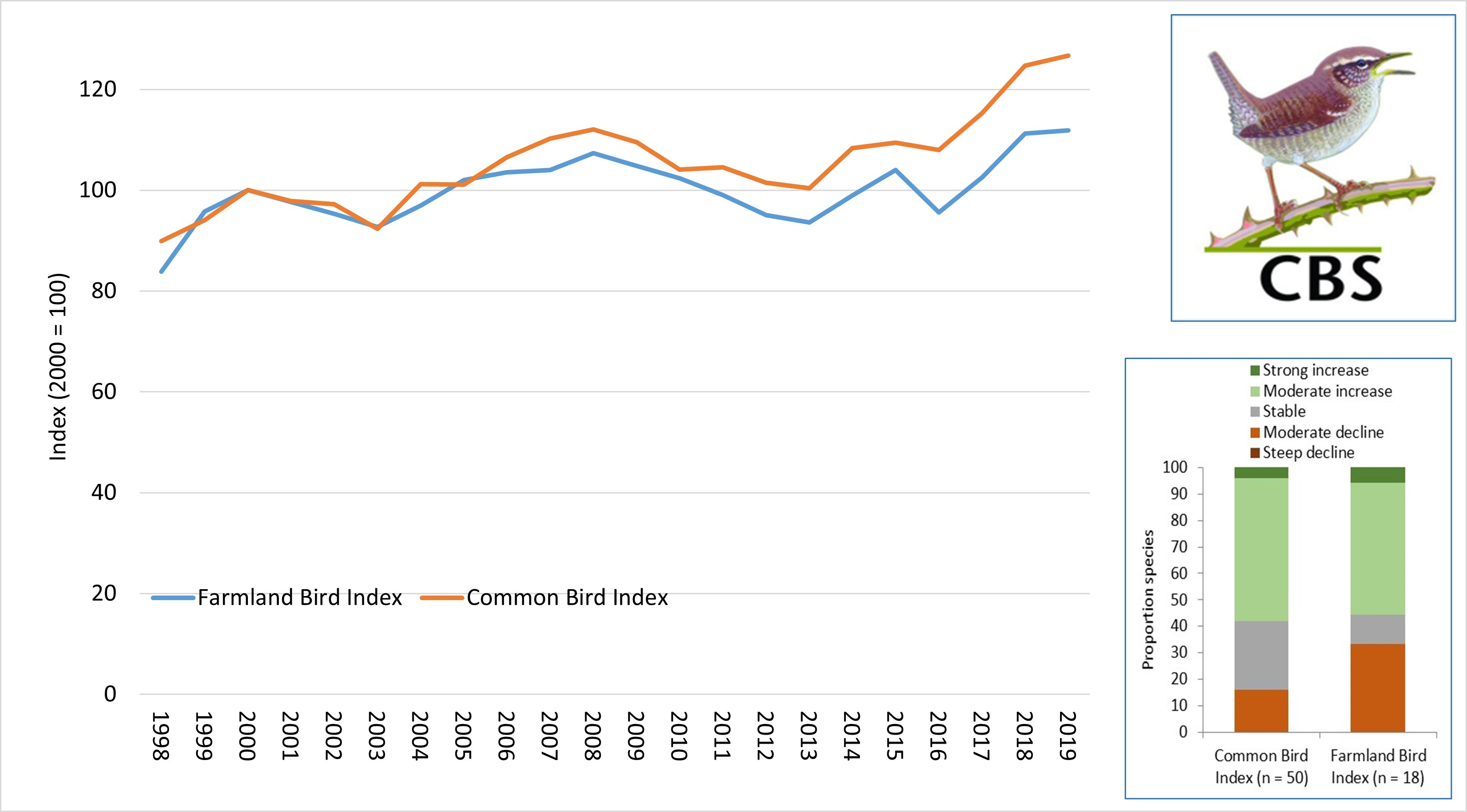 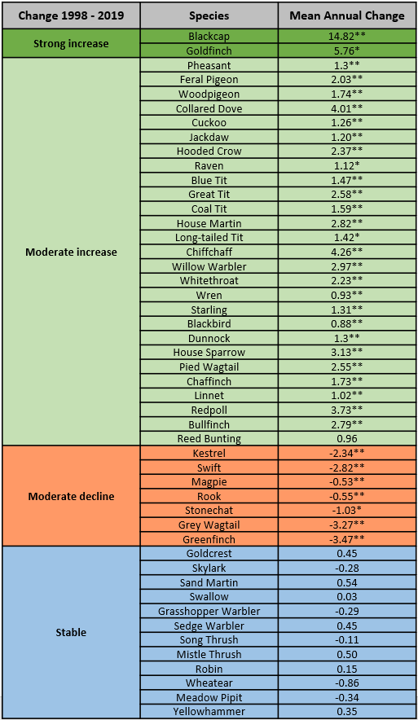 Across many habitats, birds are generally regarded as good general indicators of the broad state of wildlife and of the countryside, for both scientific and practical reasons (Furness and Greenwood, 1993; Gregory et al. 1995; Crowe, 2012).  They are relatively easy to detect, identify and census, their taxonomy is stable, and the general level of understanding of their biology is quite high.  As a group, they can be found across a broad range of habitat types and relative to other animals, are moderately abundant and of intermediate body size and life span.  Consequently, their populations respond to changes in the environment at moderate spatial and temporal scales.

The Countryside Bird Survey (CBS) is Ireland's national monitoring scheme for common and widespread breeding birds.  The scheme began in 1998, is funded by the National Parks and Wildlife Service and is coordinated by BirdWatch Ireland.  Operating since 1968, BirdWatch Ireland is Ireland’s largest independent conservation organisation with currently over 14,000 members distributed through 20 branches nationwide.  The CBS is an annual survey that is underpinned by the efforts of primarily volunteer observers. The survey aims to measure changes in the number of birds based on a random selection of 1km sample plots, stratified by region, surveyed from year to year (Lewis et al. 2019). Following statistical analysis, the data are used to generate indices for both individual species and multi-species trends. These indices relate to the population in any given year to that of the baseline (the first year data is available) which is given a value of 100.

Despite the largely positive trends for many bird species, these trends should be interpreted in the context of significant large-scale declines in common bird populations across Europe during and prior to the 1980s (Pan-European Common Bird Monitoring Scheme, 2015). As such, the Countryside Bird Survey Report 1998 - 2019 recommends that although population increases of many species are welcomed, they should be viewed as the recovery of populations rather than increases. More information on how to accurately interpret the trends can be found here: https://birdwatchireland.ie/our-work/surveys-research/research-surveys/countryside-bird-survey/countryside-bird-population-indicators/

More information on BirdWatch Ireland can be found here: http://www.birdwatchireland.ie

Trends in the status of birds

Bird populations are sensitive to changes in land-use and agricultural practices at moderate spatial and temporal scales, and have been considered as good general indicators of the broad state of wildlife and the countryside.  This indicator is based on the population trends of native wild breeding birds in Ireland.  Co-ordinated by BirdWatch Ireland, wide-scale monitoring schemes measure the population sizes of 50 species across a variety of habitats.