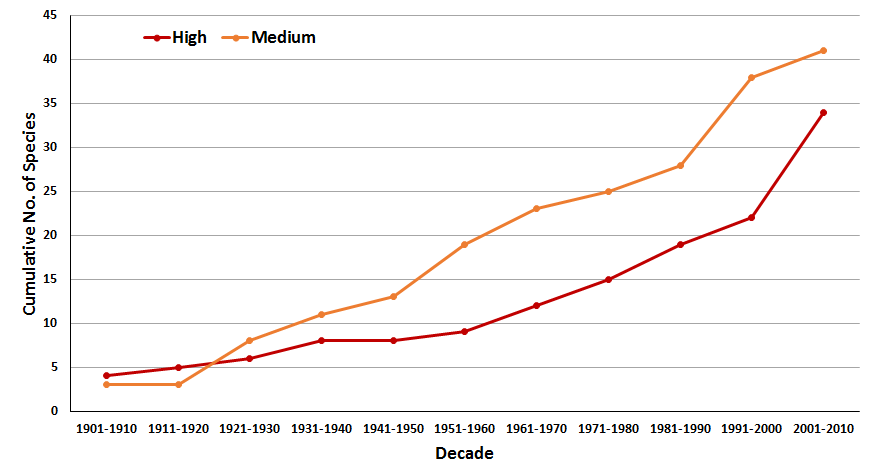 Worldwide, invasive alien species are one of the primary drivers of biodiversity loss.  By preying directly on native species or competing with them for resources, invasive alien species can rapidly and irreversibly damage native ecosystems.  In parallel with increased globalisation, there has been a marked increase in the movement of non-native species around the world.  Numerous non-native species, many only introduced in the past 200 years, have successfully spread and become established across large areas of Europe (Hulme, 2009).  Currently, invasive alien species are being introduced into Europe at an unprecedented rate and, unless robust control and eradication measures are taken, the rate of biological invasion and the damage it causes will continue to increase (European Commission, 2011).

These data are derived from risk assessments conducted for 377 non-native species recorded in Ireland up to 2012 from the Invasive Species in Ireland 2013 prioritisation risk assessment database.  The risk assessment process is detailed is Kelly et al. (2013) and broad trends summarised in O’Flynn et al. (2014), where species were categorised as being of high (48 species), medium (79 species) or low risk (250 species) to Irish ecosystems.  Only those species considered to be of high or medium risk are presented in this indicator.

Access to the latest information on Ireland’s invasive and non-native species can be found here:

European Commission 2011. Our life insurance, our natural capital: an EU biodiversity strategy to 2020. Communication from The Commission to the European Parliament, The Council, The Economic and Social Committee and The Committee of the Regions.

Kelly, J., O’Flynn, C., Maguire, C. 2013. Risk analysis and prioritisation for invasive and non-native species in Ireland and Northern Ireland. A report prepared for the Northern Ireland Environment Agency and National Parks and Wildlife Service as part of the Invasive Species Ireland initiative.