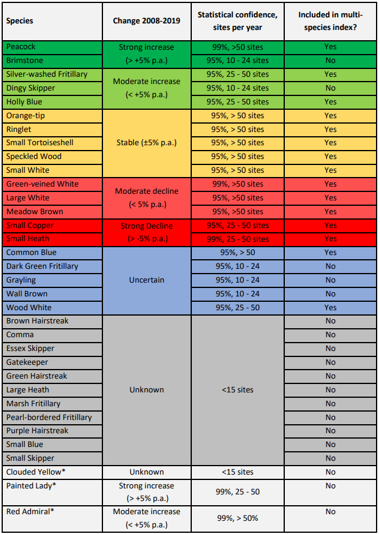 Butterfly populations are sensitive to changes in climate, land-use and agricultural practices at small to moderate spatial and temporal scales, and are being monitored nationally across 22 countries in Europe.  Funded by the European Environmental Agency, the European Grassland Butterfly Indicator, based on data from 17 species monitored across 4,500 sites (ca. 120 in Ireland) as part of national monitoring schemes, shows that between 1990 and 2015 these butterfly populations have declined by 30% (Van Swaay et al. 2016).

This indicator is derived from systematic monitoring schemes coordinated by the Irish Butterfly Monitoring Scheme and the National Biodiversity Data Centre. The scheme has been operating since 2007 with currently over 80 citizen-scientists distributed nationwide, recording butterfly species and abundance using a fixed-width transect count method for 26 weeks between April and October each year.  The population data from each species is analysed using a two-stage modelling approach using a GAM fitted across multiple sites to estimate the flight curve and this standardised flight curve is then used as an offset in a loglinear model (Dennis et al., 2013; Schmucki et al. 2016).  Each year, the geometric mean of the indices for each species is calculated and a smoothed trend with 95% confidence interval estimated by Monte Carlo simulation (Soldaat et al., 2017).

Across 15 common and widespread species, the highest butterfly populations observed since the monitoring scheme began in 2008 were recorded in 2010, and the lowest in 2016.  Populations that were in decline experienced marked increases in 2019 and in combination with the variability in butterfly populations across years the current long-term trend is of moderate decline (-1.3 ± 0.92% p.a.).  On a per species basis from 2008-2019: 5 species have increasing populations, 5 have stable populations, 5 are in decline and 5 are too variable to assign a statistically rigorous trend.  A further 14 resident species lack sufficient data for their population sizes to be formally assessed.

More information on the Irish Butterfly Monitoring Scheme can be found here:

Data B.2.ii. Trends in the status of butterflies

Trends in the status of butterflies

Butterfly populations are sensitive to changes in climate and land-use at small to moderate spatial and temporal scales, and are being systematically monitored nationally across 22 countries in Europe, including Ireland.  This indicator is based on the population trends of native breeding butterflies from the Irish Butterfly Monitoring Scheme co-ordinated by the National Biodiversity Data Centre.