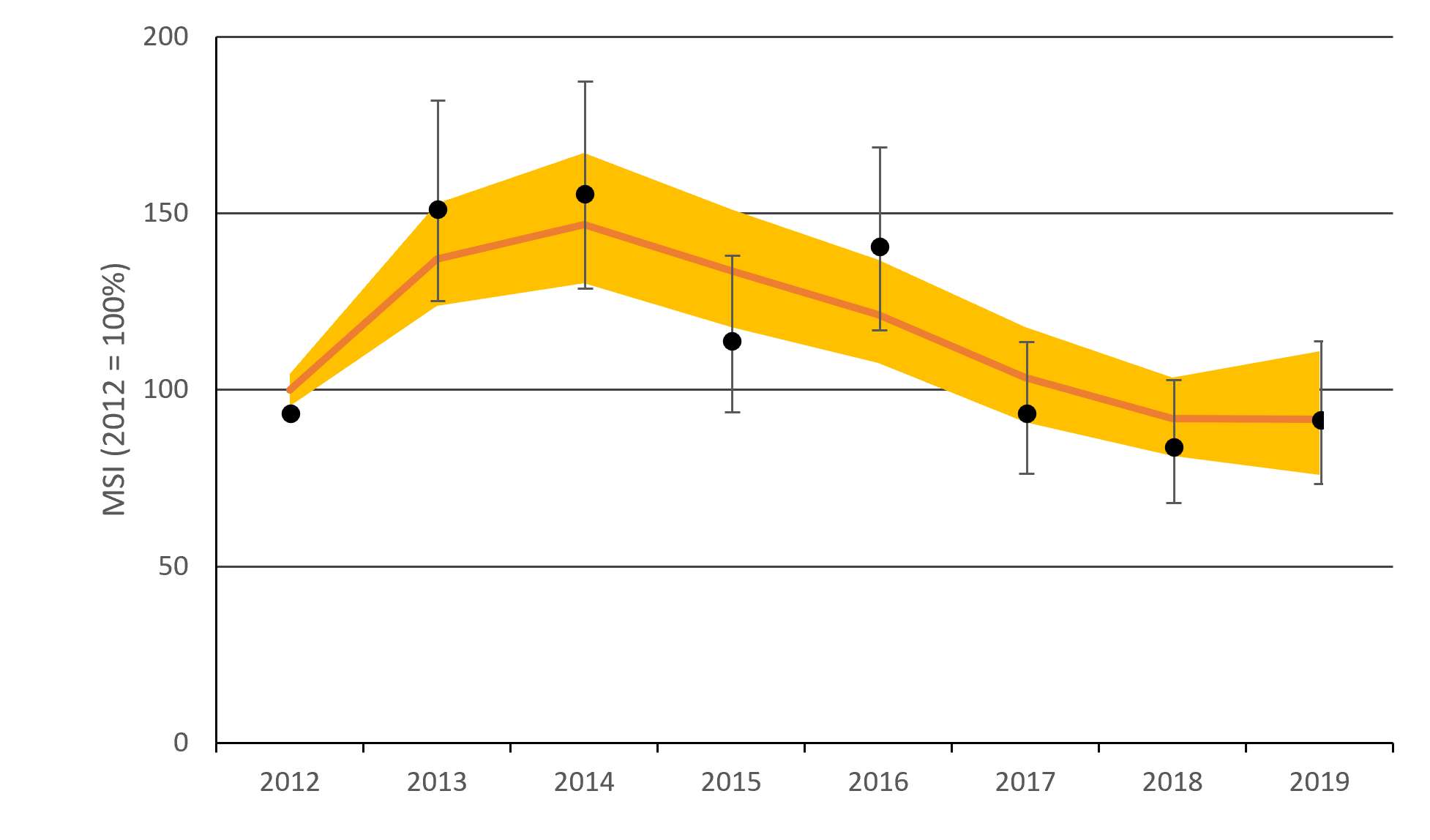 Bumblebee populations are sensitive to changes in climate, land-use and agricultural practices at moderate to large spatial and temporal scales.  Of the 98 bee species in Ireland, 20 are bumblebees.  However, in terms of the numbers of individual bees, bumblebees typically comprise more than 80% of Irish wild bee communities, hence their prominence as our most important group of pollinating insects (Murray et al., 2012).  At present, seven species bumblebee are under threat of extinction in Ireland (Fitzpatrick et al., 2006).

This indicator is derived from systematic monitoring schemes coordinated by the All-Ireland Bumblebee Monitoring Scheme and the National Biodiversity Data Centre in collaboration with the Bumblebee Conservation Trust in Northern Ireland, and is the first national-level bumblebee recording scheme in the world. Trailed in 2011 and running since 2012, the monitoring scheme currently has ca. 105 sites walked by 80 citizen-scientists distributed across the island Ireland recording bumblebee species and abundance using a fixed-width transect count method along a 1-2 km route, each month between March and October.  It is also a key component of the All-Ireland Pollinator Plan 2015-2020 in terms of tracking implementation of the Plan and its impact on our wild pollinator populations.

The population data from each species is analysed using TRIM (Trends and Indices for Monitoring data; Pannekoek & van Strien, 2005), a programme to analyse time-series of counts with missing observations using Poisson regression.  Each year, the geometric mean of the indices for each species is calculated and a 95% confidence interval estimated by Monte Carlo simulation (Soldaat et al., 2017).

Across eight common and widespread species, the highest bumblebee populations observed since the monitoring scheme began in 2012 were recorded in 2014 and the lowest in 2018. The imuti-species index shows the overall trend from 2012-2019 is a year-on-year decline of 4.8% (with a 95% confidence interval around our estimate being ± 2.4%). On a per species basis, from 2012-2019, 2 species are in decline (Bombus pascuorum [common carder bee] and Bombus muscorum [large carder bee]) and 6 are too variable to assign statistically rigorous trend.  A further 12 species lack sufficient data for their population sizes to be formally assessed.

More information on the All-Ireland Bumblebee Monitoring Scheme can be found here:

More information on the All-Ireland Pollinator Plan 2015-2020 can be found here:

The International Union for the Conservation of Nature (IUCN) Regional Red List for Irish bees is available here: http://www.npws.ie/publications/redlists/

The International Union for the Conservation of Nature (IUCN) European Red List for Bees is available here: https://www.iucn.org/content/european-red-list-bees

More information on the Bumblebee Conservation Trust, U.K. can be found here:

Data B.2.i. Trends in the status of bumblebees

Trends in the status of bumblebees

Bumblebee populations are sensitive to changes in climate, land-use and agricultural practices at moderate to large spatial and temporal scales, and provide the essential ecosystem service of pollination.  This indicator is based on population trends of native bumblebees from the All-Ireland Bumblebee Monitoring Scheme co-ordinated by the National Biodiversity Data Centre.