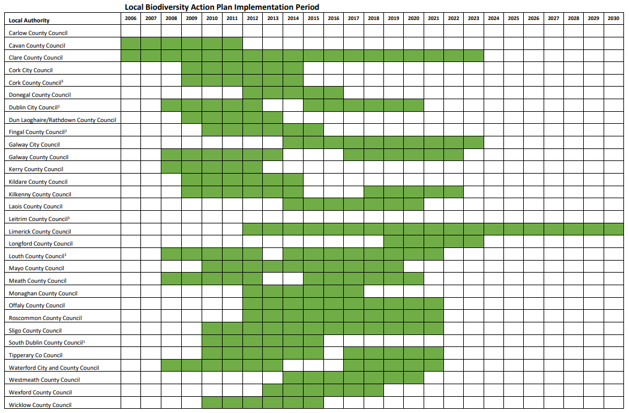 In 1992, the United Nations Conference on Environment and Development was held in Rio de Janeiro and attended by over 150 governments. One landmark international agreement that resulted was acceptance of the Convention on Biological Diversity (CBD). This recognised for the first time that biological diversity is "a common concern for humankind", with each country needing to take responsibility in order to halt the global loss of biodiversity. The Irish Government signed the CBD in 1992, and ratified it in 1996.

One of the main obligations is that each Contracting Party develop national strategies or plans for the conservation and sustainable use of biological diversity.  Implemented by the Department of Arts, Heritage and the Gaeltacht, Ireland’s first National Biodiversity Plan published in 2002 (Action 10), and the second plan in 2011 (Action 1.7), prioritise the development of Local Biodiversity Action Plans to effectively implement actions to conserve biodiversity at a community level.

The current National Biodiversity Action Plan, Actions for Biodiversity 2017-2021 can be found here:https://www.npws.ie/legislation/national-biodiversity-plan

Data E.1.ii. The number of Local Authority Biodiversity Action Plans in place and in development.

The number of Local Authority Biodiversity Action Plans in place and in development.