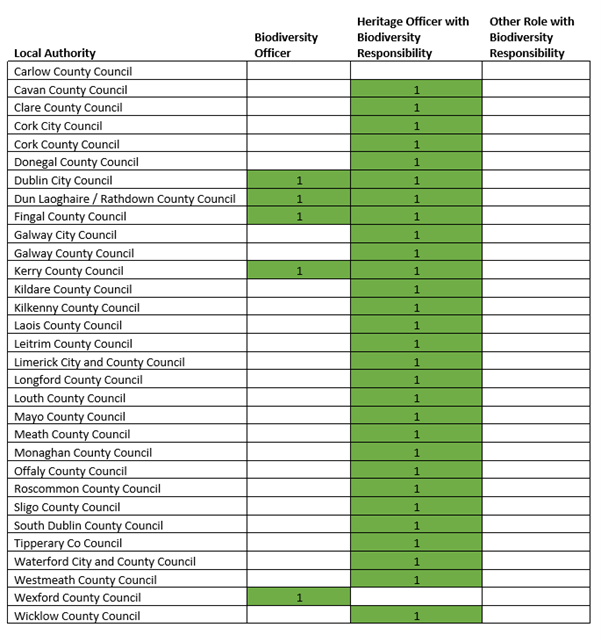 In 1992, the United Nations Conference on Environment and Development was held in Rio de Janeiro and attended by over 150 governments. One landmark international agreement that resulted was acceptance of the Convention on Biological Diversity (CBD). This recognised for the first time that biological diversity is ‘’a common concern for humankind’ with each country needing to take responsibility in order to halt the global loss of biodiversity. The Irish Government signed the CBD in 1992, and ratified it in 1996.

One of the main obligations is that each Contracting Party develop national strategies or plans for the conservation and sustainable use of biological diversity.  Action 10 of Ireland’s first National Biodiversity Plan published in 2002, and Action 1.8 of the second plan in 2011 prioritise the designation of “a suitably qualified officer for natural heritage conservation matters in its area”, to facilitate the implementation of the National Biodiversity Action Plan and manage biodiversity conservation at a community level.

In most Local Authorities, the Heritage Council’s County Heritage Officer Network are responsible for managing and promoting local heritage, and implementing strategies, policies and projects relating to the protection of local heritage.  In addition, the Heritage Council supports a growing network of Biodiversity Officers within Local Authorities, who have a specific biodiversity conservation remit.

Data E.3.i. Number of Biodiversity Officers in Local Authorities and other departments

The Heritage Council’s Network of County Heritage Officers and Biodiversity Officers play an important role in implementing strategies, policies and projects relating to the protection of local biodiversity.  This indicator tracks the number of personnel in Local Authorities with a biodiversity responsibility.