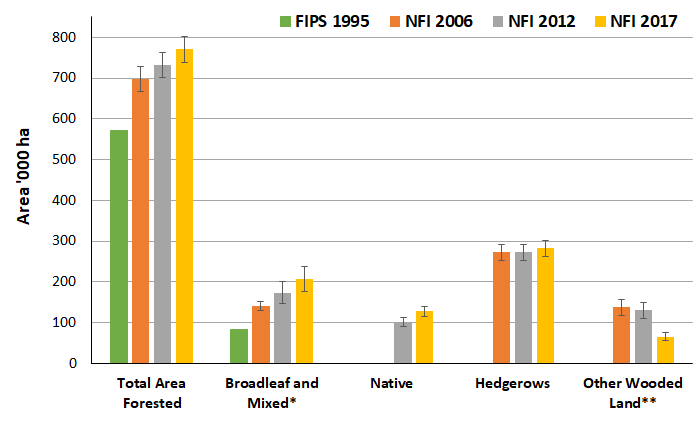 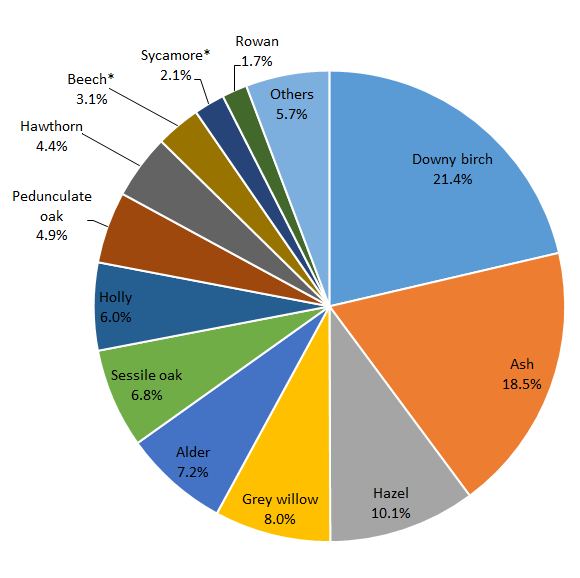 The NFI also estimates the area of hedgerow (linear features < 20 m with tree and/or shrubs present) and this has increased slightly on 2012 estimates, but the increases lie with the margin of error of the estimate and may not represent a genuine increase.  In NFI 2006 and NFI 2012, the area of scrub (areas dominated by woody vegetation 0.5 – 5 m in height) habitats was estimated, but in NFI 2017 this land-use was reclassified under a pre-existing category ‘Other Wooded Habitats’.  For comparability, the area of ‘Scrub’ and ‘Other Woodland’ in previous surveys were combined to compare with NFI 2017 ‘Other Wooded Habitats’.  These transitional habitats have declined by 64,550 ha (50%) since 2012.

In terms of the conservation status of our native woodlands, the National Survey of Native Woodlands funded by the National Parks and Wildlife Service and the Forest Service, surveyed 1,217 woodland sites across all 26 counties from 2003-2007 (Perrin et al., 2008). A range of criteria relating to the site area, occurrence of rare species, structural diversity and regeneration status were used to evaluate the conservation status of each site, and the impact of invasive species, non-native tree species and grazing were used to assign a threat status to each site.  Overall, 29.9% of sites were of Excellent or Good conservation status, whereas 93.7% of site had a Low or Moderate threat status.

At present, the current and short-term status of this indicator is intermediate as although planting native (>80% native trees) and mixed (20-80% non-native) woodlands has increased, the net impact on biodiversity when accounting for losses to existing, but highly fragmented, old (continuously wooded since 1830-44 Ordinance Surveys) or ancient woodlands (continuously wooded since 1660) is unclear (Iremonger et al., 2006;  Perrin et al., 2010).

More information on the National Forest Inventory can be found here:

More information on the National Survey of Native Woodlands can be found here:

Ireland is one of the least forested countries in Europe with 10.5% of its area under forest cover, the majority of which represents commercial conifer plantations. This indicator tracks changes in the area of native woodland habitats over time.