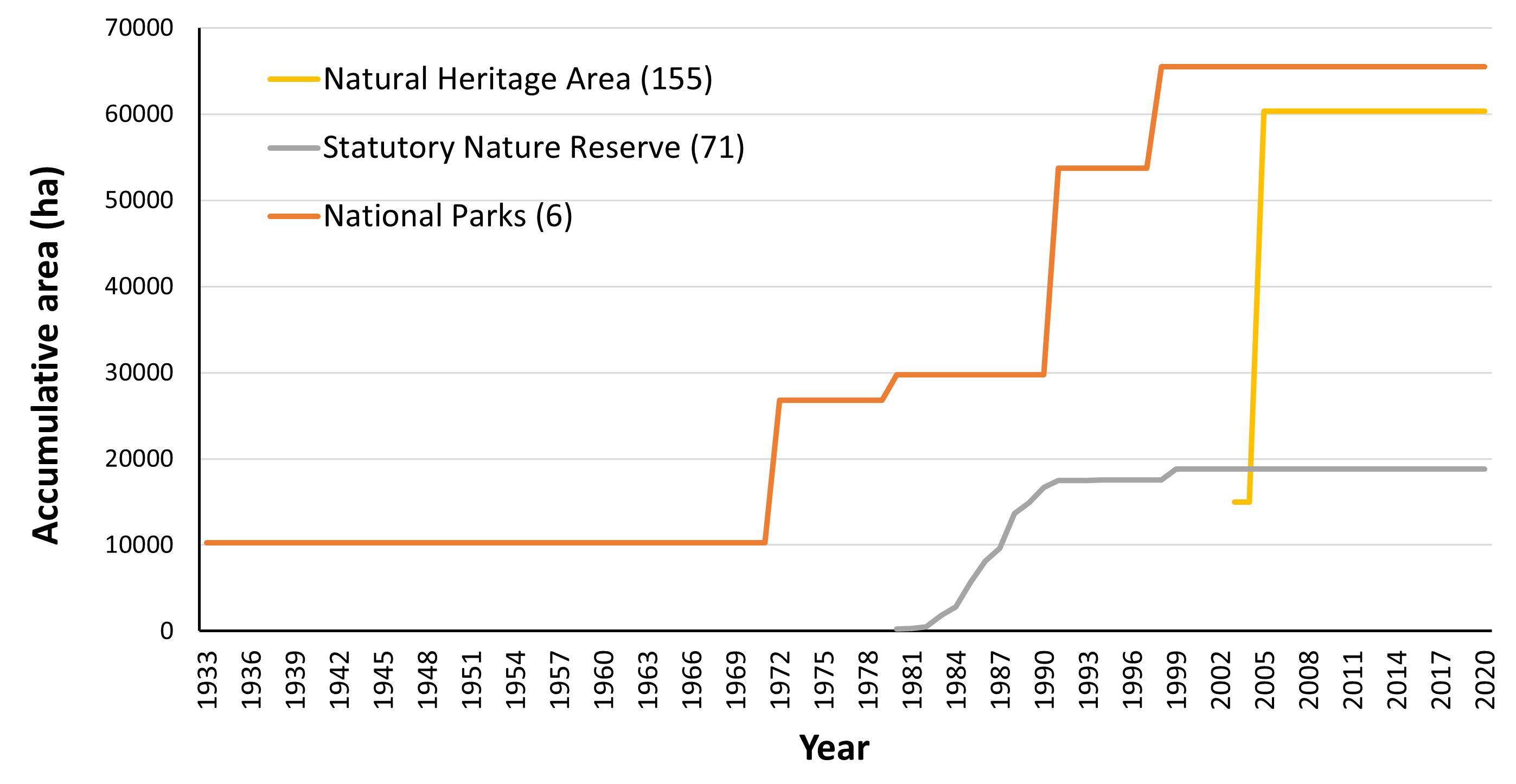 The basic designation for wildlife in Ireland is the Natural Heritage Area (NHA). This is an area considered important for the habitats present or which holds species of plants and animals whose habitat needs protection.  After European designated protected areas in Ireland, NHAs represent the largest nationally designated protected areas with 155 sites covering 60,326 ha.  Under the Wildlife Amendment Act (2000), NHAs are legally protected from damage from the date they are formally proposed for designation.

At present, NHAs largely represent raised and blanket bog habitats but there are an additional 1090 proposed NHAs (pNHAs) covering 845,223 ha which were published on a non-statutory basis in 1995 that represent a diversity of sites deserving protection, from small roost areas for rare bats to large lakes and woodlands.  Prior to statutory designation, pNHAs are subject to limited protection, in the form of: agri-environmental farm planning schemes that continue to support the objective of maintaining and enhancing the conservation status of pNHAs; the Forest Service requirement for National Parks and Wildlife Service approval before they will pay afforestation grants on pNHA lands; and recognition of the ecological value of pNHAs by Planning and Licencing Authorities.

National Parks are areas designated with the twin objectives of protecting habitats and species and providing a public amenity area for the appreciation of nature.  In 1969, the International Union for the Conservation of Nature (IUCN) recommended that all governments agree to reserve the term 'National Park' to areas to uphold these objectives in addition to preventing or eliminating the exploitation and occupation of the area bounded by the park, and the implementation of effective management to maintain the natural feature which led to its establishment.  Ireland’s six national parks, namely Ballycroy, Burren, Connemara, Glenveagh, Killarney and Wicklow Mountains National Parks cover an area of 65,447 ha.  Of the six the oldest, Killarney National Park, being established in 1933 is also the only national park with legislative backing (Bourn Vincent Memorial Act 1936 and subsequent Environment (Miscellaneous Provisions) Act 2015).  However, all National Parks encompass multiple designated protected areas that do have a statutory basis.

Finally, Local Authorities can designate Tree Preservation Orders (TPOs) to protect individual trees, groups of trees or woodlands under the Local Government (Planning and Development) Acts and Regulations.  Any trees which are subject to a TPO cannot be felled unless the owner applies for planning permission to their Local Authority.  In 1995, there were 178 TPOs in force but several Local Authorities have subsequently used SAAOs as an alternative mechanism to protect trees.  Due to the inconsistency in reporting TPOs in Local Authority development plans, the current number of TPOs in force nationally is at present unavailable.

The Convention on Biological Diversity Aichi Biodiversity Target 11 stated that by 2020, all parties should have at least 17% of terrestrial and inland water areas and 10% of coastal and marine areas conserved through “effectively and equitably managed, ecologically representative and well-connected systems of protected areas and other effective area-based conservation measures and integrated into the wider landscape and seascape.”  At present, NHAs in combination with spatially non-overlapping internationally designated protected areas (see D1ii) result in 16.8% of terrestrial and inland water areas and 1.32% of marine and coastal areas now lie within designated protected areas.

This indicator tracks changes in extent of nationally designated areas for nature protection.  Designation is the process of identifying and prioritising specific areas for environmental protection and typically designated protected areas means that there is legislation in place supporting the designation of the area.