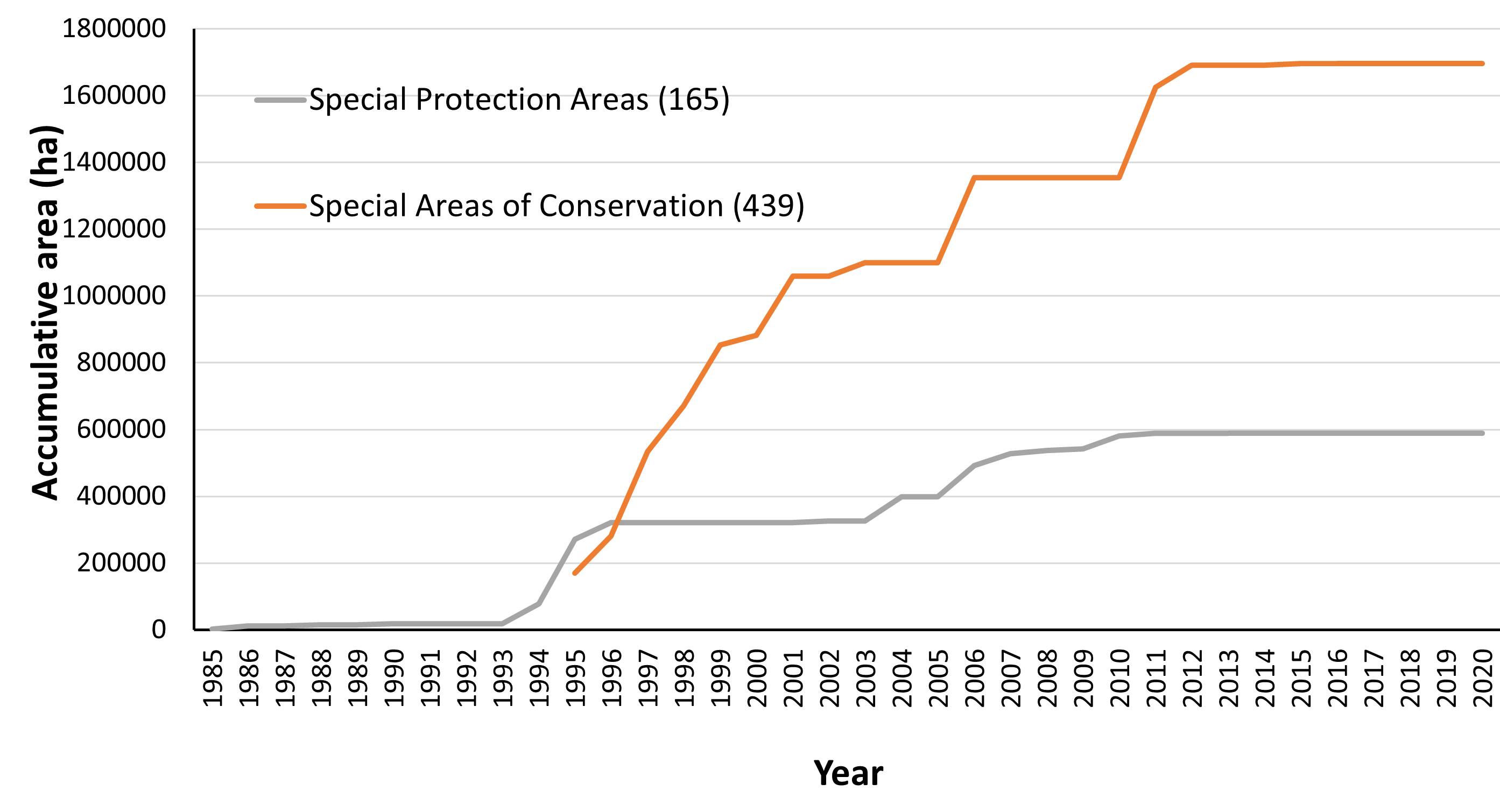 Special Areas of Conservation (SACs) are considered of both national and European importance in terms of the habitats and species conserved within their boundaries.  With a statutory basis in the EU Habitats Directive (92/42/EEC) and transposed into Irish law in 1997 (amended in 1998 and 2005), the aim of the Directive is to create a network of designated sites across the EU (Natura 2000 sites) that will protect ‘priority’ habitats and species as listed in the annexes of the Directive.  Now stretching over 18% of the EU’s land area and 6% of its marine territory, the Natura 2000 network is now the largest co-ordinated network of protected areas in the world.  To date, Ireland has 439 SACs covering 1.695 million hectares (42% terrestrial and freshwater, 58% marine).

Over 50 species of waterbird migrate to Ireland each year either on passage to more southerly resorts or to spend the entire winter here.  Consequently, swans, geese, ducks, and waders occur in internationally important numbers in winter on coastal and freshwater wetlands, and islands. Concerned with the decline of migratory birds due to habitat loss and fragmentation, intensive agriculture, forestry, fisheries, and the need to regulate hunting, EU Member States unanimously adopted the original Birds Directive 79/409/EEC in April 1979, now amended and superseded by the EU Birds Directive 2009/147/EEC.  This Directive legally obliges Member States to create a network of Special Protected Areas (SPAs) to protect the habitat of listed rare and vulnerable migratory birds, regularly occurring migratory species such as ducks, geese and waders, and wetlands of international importance to migratory birds.  In train since 1985, Ireland currently has 165 SPAs covering 589,000 hectares (55% terrestrial and wetlands, 45% marine).

Under the OSPAR Convention to Protect the Marine Environment of the Northeast Atlantic, Ireland committed to establishing marine protected areas (MPAs) to protect biodiversity.  Ireland has 19 OSPAR MPAs covering 21,788 hectares, but there is no statutory basis to this designation to fulfil commitments under this international convention.  However, like other OSPAR contracting Parties in the EU, Ireland has designated all OSPAR MPAs as SAC or SPAs to afford these important marine areas legal protection under the Habitats and Birds Directives.

Worldwide, freshwater wetland areas are under increasing pressure from expanding human populations.  The Convention on Wetlands of International Importance, the Ramsar Convention, was adopted by contracting Parties at Ramsar in Iran in 1971 and ratified by Ireland in 1985.  The Convention requires signatory governments to designate and conserve wetlands as Ramsar sites, but governments cannot be prosecuted for lack of implementation.  Ireland currently has 45 Ramsar sites covering 66,994 hectares but this designation has no legal backing.  Like OSPAR sites, all Ramsar sites now lie within other national (Statutory Nature Reserves, Natural Heritage Areas) and international designations (SACs, SPAs) that afford them a level of legal protection.

The United Nations Educational, Scientific and Cultural Organization (UNESCO) Biosphere Reserves are a network of sites worldwide that “promotes solutions reconciling the conservation of biodiversity with its sustainable use”.  Nominated by national governments, Biosphere Reserves remain under the sovereign jurisdiction of the states where they are located but their status is internationally recognized.  To date, there are 669 biosphere reserves across 120 countries of which two reserves are in Ireland: Killarney National Park and North Bull Island.  Although this designation has no statutory basis, both Irish Biosphere Reserves lie within exiting national and international designations that afford them legal protection.

Other than international designations specifically targeting areas for nature protection there are other freshwater designations relating to water quality that facilitate wildlife protection in these habitats. Designated Salmonid Waters under the Fish Directive (78/659/EEC) and European Communities (Quality of Salmonid Waters) Regulations 1998 (S.I. No. 293 of 1988), aim to protect water quality for salmonid fish due to their sensitivity to pollution.  Now superseded by the Water Framework Directive 2000/60/EEC, 1211 km across 40 rivers have been designated as Salmonid Waters.  In addition, the EU Urban Waste Water Treatment Directive (91/271/EEC) and Ireland’s Urban Waste Water Treatment Regulations set out requirements for the collection, treatment and discharge of urban waste water, with the objective of protecting the environment from the adverse effects of waste water discharges. Under the Directive, particular water bodies are designated by the Environmental Protection Agency as Nutrient Sensitive Areas where specific thresholds of microbial activity and nutrification, particularly nitrogen and phosphorous, are applied.  To date, 483 km across 23 rivers and 41,932 ha across 31 lakes, estuaries and coastal waters have been designated as Nutrient Sensitive Areas.

The Convention on Biological Diversity Aichi Biodiversity Target 11 stated that by 2020, all parties should have at least 17% of terrestrial and inland water areas and 10% of coastal and marine areas conserved through “effectively and equitably managed, ecologically representative and well-connected systems of protected areas and other effective area-based conservation measures and integrated into the wider landscape and seascape.”  At present, SACs, and SPAs in combination with spatially non-overlapping nationally designated protected areas (see D1i) result in 16.8% of terrestrial and inland water areas and 1.32% of marine and coastal areas now lie within designated protected areas.

For more information on the Environmental Protection Agency and the Water Framework Directive: https://www.epa.ie/publications/monitoring--assessment/freshwater--marine/irelands-national-water-framework-directive-monitoring-programme-2019-2021.php

For more information on RAMSAR sites in Ireland: http://www.ramsar.org/wetland/ireland

This indicator tracks changes in extent of internationally designated areas for nature protection.  Designation is the process of identifying and prioritising specific areas for environmental protection and typically designated protected area means that there is international legislation in place that has been transposed into Irish law to support the designation of the area.