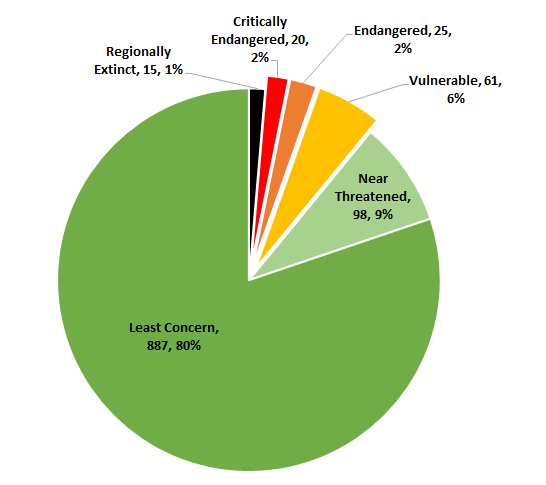 The International Union for the Conservation of Nature (IUCN) Red List of Threatened Species™ is widely recognized as the most comprehensive, objective global approach for evaluating the conservation status of plant and animal species.  The vascular plants (comprising of ferns of flowering plants) were the first group of species for which an Irish Red List was undertaken and published as “The Irish Red Data Book. 1 Vascular Plants”, (Curtis & McGrough, 1988).  Subsequently, the assessment methodology for Red Lists has been revised and standardised worldwide, and a re-assessment of the Irish vascular plant flora was required.   In addition, the National Botanic Gardens published Ireland’s National Strategy for Plant Conservation in 2006 in line with the Convention on Biological Diversity (CBD) Global Strategy for Plant Conservation.

Published in 2016 by the National Parks and Wildlife Service, Ireland Red List No. 10 Vascular Plants (Wyse Jackson et al., 2016) assessed 1,211 native and archaeophyte (plants introduced by humans deliberately or accidently, before 1500 AD) vascular plant species and subspecies confirmed as occurring in the wild in Ireland between 1800 and 2014.  Based on a database of 500,808 hectad (individual plant records collated to a 2 km2 level) records, two time periods were compared for the purposes of the assessment (1930-1969 vs. 1987-1999).

Of the 1,211 taxa included in the Red List, 105 could not be evaluated due to insufficient data or uncertainties regarding their native or taxonomic status.  Of the remaining 1,106 species assessed 15 (1.4%) are now Regionally Extinct, 106 (9.6%) are threatened (either Critically Endangered, Endangered or Vulnerable), 98 (8.9%) of Near Threatened status and 80.2% of Least Concern.

More information on the Ireland Red List No.10: Vascular Plants can be found here:

More information on Ireland’s National Strategy for Plant Conservation can be found here:

Data B.3.i. Trends in the status of plants

Trends in the status of plants

Plants are fundamental to the existence of other forms of biodiversity, acting as a source of food, providing habitat for other wildlife, and the provision of essential ecosystem services such as nutrient cycling, air quality and climate regulation. This indicator will be based on changes in population size and distribution of species across Ireland.